Want the lowdown on trans fat? There's a free handout that you can download at the bottom of this post...

The U.S. Food and Drug Administration announced its preliminary determination that partially hydrogenated oils (PHOs) -- the primary dietary source of artificial trans fat in processed foods -- are not “generally recognized as safe” for use in food. The FDA’s preliminary determination is based on available scientific evidence and the findings of expert scientific panels.

The agency has opened a 60-day comment period on this preliminary determination. The goal of the comment period is to collect additional data and to gain input on the time that food manufacturers may need in order to reformulate products that currently contain artificial trans fat, should this determination be finalized. You can read the full press release here.

Why is trans fat harmful?

Trans fat has been shown to raise LDL (a.k.a. "bad") cholesterol levels. There is no “safe amount,” nor are there any known health benefits. The Institute of Medicine insists that individuals should keep consumption of trans fat as low as possible. A post in the FDA blog states, "Elimination of industrially produced trans fat from foods could prevent 20,000 heart attacks and 7000 heart-related deaths each year."

Another benefit to removing trans fats from processed foods is that consumers would not have to worry about the 0.5 grams per serving that can sneak into foods that maintain a "no trans fat" claim. That's because it's legal for a food to contain that amount and still show 0 grams trans fat on the label. Perhaps all of the restaurants that still fry in oil that contains trans fats would transition to use fry oil that is less bad for your health? It would certainly be a step in the right direction. After all, one particular fried food chain restaurant contains a menu full of items that have 6 to 9 grams of trans fat per serving!

It used to be that there was a large list of foods that were chock-full of partially hydrogenated oils and trans fat: pies, cakes, crackers, cookies, shortening, fried food, donuts, ice cream, frozen desserts, peanut butter, and margarine.

However, since 2003, trans fat consumption has fallen from 4.5 grams per person per day to 1 gram per person per day, at least according to the FDA. The addition of trans fat to the Nutrition Facts Labels on food packages in 2006 motivated food manufacturers to find alternate ingredients and manufacturing processes so they could claim 0 g trans fat per serving for their products.

We set out to find foods that contain trans fat from partially hydrogenated oils, and it was harder than we thought! Many processed foods now contain fully hydrogenated palm oil. Although this means less trans fat, the fat that replaces it is seriously bad news for your heart. Now there's a significant amount of saturated fat per serving.

Here are a few common foods and their trans fat content...

*Note: Some fast food chains do fry items in oil that is trans-fat-free. But some do not. The ones that don't use the more healthful oils have items that contain a lot of trans fat. This was the most significant source.

How do you know if your food contains trans fat?

The two best ways to find out if there's trans fat in your food are:

For foods that you buy in a store, there is no better way to learn about the trans fat content than by glancing at the Nutrition Facts label. The trans fat is located in the fat section near the top of the label. Here is a label for kettle popcorn that contains 5 grams of trans fat per one cup serving -- can you find that information too?

Read ingredient lists. Foods that contain partially hydrogenated shortening may claim 0 grams of trans fat, but they could actually contain 0.5 grams or less per serving. Eating cereal, cookies, and frozen nuggets that contain partially hydrogenated oils could easily add a few grams of trans fat to your day, even though they all state 0 g trans fat. That's per serving, not per box.

2. No Label? No Problem! Use the Internet.

Most large restaurant chains list the nutrition facts for their menu on their websites. Here are a few popular ones:

It's always a good idea to read the Nutrition Facts Label on foods in the grocery store and to visit restaurants websites to find out what is really in the foods that you eat on a regular basis. Just because a food is trans-fat free doesn't mean that it is low in saturated fat, which is often used in place of the trans fat that manufacturers removed. Many processed foods are high in sodium too.

What is "natural" trans fat?

rTFAs are found naturally in ruminant animal products. Ruminant animals include cows, sheep, and goats. rTFA is found in the meat and butterfat of dairy products from these animals. James Kenney, PHD, FACN, explains, “In meat and dairy from ruminant animals, the impact of the these naturally-occurring TFAs are likely to be modest compared with the far larger amount of saturated fat they often contain.”

iTFAs are known as industrial trans fatty acids and are synthetic. They are created by a process that adds hydrogen to liquid vegetable oils to make them solid. Ingredients which show “partially hydrogenated oils” often contain them.

rTFAs are found naturally in ruminant animal products. Ruminants include: cows, sheep and goats and the rTFA is found in the meat and butterfat of dairy products from these animals.

"There is limited evidence to support a substantial biological difference between natural and synthetic TFAs." -nel.gov

Education about these foods and their impact on health can make a big difference in people's quality of life. Trans fat reductions can prompt similar reductions in disease risk. Get all the facts with the following educational resources... 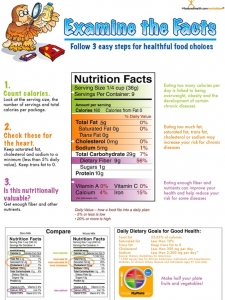 Judy’s passion for cooking began with helping her grandmother make raisin oatmeal for breakfast. From there she earned her first food service job at 15, was accepted to the world-famous Culinary Institute of America at 18 (where she graduated second in her class), and went on to the Fachschule Richemont in Switzerland where she focused on pastry arts and baking. After a decade in food service for Hyatt Hotels, Judy launched Food and Health Communications to focus on flavor and health. She graduated with Summa Cum Laude distinction from Johnson and Wales University with a BS in Culinary Art, holds a master’s degree in Food Business from the Culinary Institute of America, 2 art certificates from UC Berkeley Extension, and runs a food photography studio where her love is creating fun recipes.

Judy received The Culinary Institute of America’s Pro Chef II certification, the American Culinary Federation Bronze Medal, Gold Medal, and ACF Chef of the Year. Her enthusiasm for eating nutritiously and deliciously leads her to constantly innovate and use the latest in nutritional science and Dietary Guidelines to guide her creativity, from putting new twists on fajitas to adapting Italian brownies to include ingredients like toasted nuts and cooked honey. Judy’s publishing company, Food and Health Communications, is dedicated to her vision that everyone can make food that tastes as good as it is for you.