Since November is Pancreatic Cancer Awareness Month, we're cracking the vault to give you content that is usually exclusive to our members. To learn more about becoming a Communicating Food for Health member -- and thus getting updates like these all the time -- visit our membership site or register now. Our present year-end offer is a great value because you get a free 2014 Food and Health Calendar with your subscription or renewal! In the meantime, read on for a closer look at diet and pancreatic cancer, from James J. Kenney, PhD, FACN...

A recent study that followed men for 16.7 years found that those who had higher levels of insulin, blood glucose, and insulin resistance at the start of the study were more likely to develop pancreatic cancer (1). Both men and women with type 2 diabetes are known to have about twice the risk of developing pancreatic cancer.

Another study that followed 190,045 people for 7 years found that those who ate the most processed meats as well as those who consumed the most beef, pork and lamb had a 50-68% increased risk for pancreatic cancer (2).

Another study that followed a half million AARP members found after 6 years those consuming the most animal fats from red meats and dairy were much more likely to be diagnosed with pancreatic cancer. The men who consumed the most animal fats had a 53% increased risk of developing pancreatic cancer compared to those who consumed the least after adjusting for body weight, smoking, age, and other risk factors. The authors wrote: “We observed positive associations between pancreatic cancer and intakes of total, saturated and monounsaturated fat overall, particularly from red meat and dairy food sources.” There was no consistent association between polyunsaturated fat from plants and the risk of pancreatic cancer after adjusting for other risk factors.4

Lowering Cholesterol Levels Reduces Cancer Risk
Back in the 1970s, a study in Hawaii found that smokers with higher serum cholesterol levels had a much higher risk of developing lung cancer. In May 2005, a study of nearly a half million U.S. veterans was presented at the American Society of Clinical Oncology. The results showed that the development of lung, prostate, pancreatic and esophageal cancers was cut by about 50% in those taking statin drugs to lower their cholesterol levels. This data suggests a high-fat, Western diet rich in animal products may not only be promoting atherosclerosis, but may also be promoting the growth and spread of prostate cancer and likely other cancers as well.

Since pancreatic cancer is nearly always fatal, people need to focus on prevention. A rich Western diet, weight gain, and the development of insulin resistance, along with exposure to tobacco smoke appear to be the main controllable risk factors for reducing the risk of pancreatic cancer. Exercise, weight loss, and a diet high in fruits, vegetables, whole grains, and beans with a little or no processed meats and red meats appears best for those interested in avoiding perhaps the most deadly of all the cancers.

Check out our diet and cancer prevention materials.

Here is our best year-end offer for Communicating Food for Health - good for a new subscription or renewal:

Check out our new 2014 Food and Health Calendar, available for purchase or free with a one to three year subscription to our premium newsletter and membership library, Communicating Food for Health: 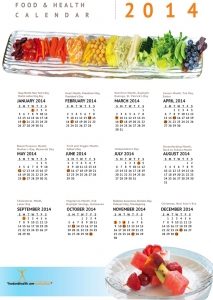 
Could Eating Fish Regularly Raise Your Risk of Skin Cancer?