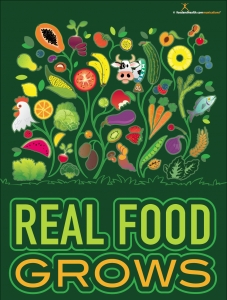 September is Fruits and Veggies More Matters Month! To help you look your very best, right now, I want to offer you a sneak peek at the fantastic handout that accompanies the bestselling Real Food Grows poster. It might be just the thing you need to prepare for next month's theme. Take a look...

According to the Dietary Guidelines for Americans, most Americans do not consume enough potassium, calcium, vitamin D, or dietary fiber. Make sure you’re not one of that crowd by eating plenty of fresh, whole foods.

Choose fresh vegetables. They are packed with nutrients, and they skip the added sodium. If you do choose canned varieties, be sure to get them with no added salt. If you have to get frozen veggies, skip the sauce packet.

Great, so choosing fresh veggies is beginning to make nutritional sense. But what about fruit? Well, fresh fruit is free of most added sugars — unlike many frozen or canned varieties. According to the Dietary Guidelines for Americans, added sugars are being consumed far too often and in way too large amounts to be healthful. They assert, “Reducing the consumption […] of added sugars will lower the calorie content of the diet, without compromising its nutrient adequacy.”

So what do added sugars have to do with choosing fresh fruit more often than canned or frozen options? It turns out that quite a bit of added sugars can sneak into the latter elements. For example, one cup of sliced peaches in heavy syrup is loaded with 46 grams of sugar. An actual peach has only 13 grams of sugar.

Fruit-flavored products also can be misleading. They sound healthful, but often contain very little real fruit. Only 2% of the ingredients in Blueberry Eggo Waffles, for example, are blueberries. There’s far more sugar than fruit in those waffles.

Real food grows. When it comes to choosing fruits and vegetables, pick whole, fresh options more often than frozen or canned varieties. These fresh foods are more nutrient-dense and pave the way to a more complete nutritional profile.

If you're a member, then don't miss other great Fruits and Veggies More Matters Month resources! Creative Presentations: New Twist for a Vegetable Platter offers another fantastic handout, this time excerpted from the Home Run Meals Cookbook. It's perfect for cooking demonstrations, emails/newsletters, and health fair booths. Check it out!

There are even more Fruits and Veggies More Matters Month resources in the Nutrition Education Store. Which ones will be most useful for you?